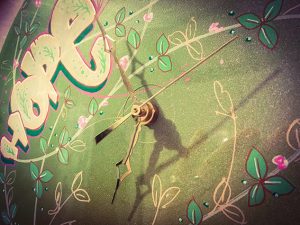 Latifah Nankivell passed away at the end of 2012. My beautiful mother died peacefully, in control of her care, with dignity and love. The grief that hit me, although expected, hit me hard. I’ve since learned that this may be linked with my mother being unable to grieve fully for her own mother. It may simply be that losing your mother is monumental – we are born from our mother’s flesh. When she passed, I could feel an endless line of women – her mother, her mother’s mother, her mother and all the mothers who are my female ancestors. I moved up a notch in the line, which has started reaching into the future with my own twin daughters Brooke and Sofie.

‘Time Heals’ is a series of four pieces about wading through the grieving process. I feel like I’ve come through the worst of the fog that is grief. I feel lighter, like Spring after a hard Winter. The times of the clock hands represent the time of my mother’s death, the time of my own birth and the births of my two daughters. Time shifts and changes, slows down, speeds up and stands still. It is momentous and miniscule, and it makes sense.

Latifah, may you rest in Peace, I thank you for the Love you gave and continue to give me. Sofie and Brooke give us Hope for the future and Faith that the cycle and circle of life and death continue as they should.

And if you wish to put a battery in the clock mechanism – it will begin to tick, tock, marking the passing of time once again. 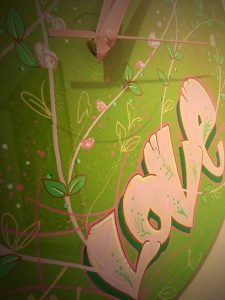 When you’re in the minority, you get judged harder because you stand out, you also get easy props from a crowd, and it skews things. The first time I ever DJ’d in a club, I was terrible, but I had all these girls shaking my hand and going wild – it freaked me out! I threw down at De La Soul in Newport – I did such a basic set and got a massive cheer – it feels false and takes away some of the drive and ambition to be better, to train harder. It also doesn’t help as it can cause resentment from the bboys.

Painting is different to breaking and MCing, because you’re not putting your physical self out there (unless you’re in hotpants, but that’s a-WHOLE-nother topic…). Painting is a social thing for me – I vibe off other people – we don’t need a crowd, we just create. Friendships are formed with people who you trust and who you can let loose and be yourself with. I’ve found these friendships with both guys and girls in hip-hop, but I’ve kept the links over time with more girls – because I am one.

A lot of people say we shouldn’t separate male and female for events, making female only events, as it’s excluding people. In a way I do agree, but I have seen the benefit of events such as Femme Fierce, and the B-Girl competitions I’ve been to, in giving confidence to females to represent, and making links with other women who are into hip-hop. I’ve never run a ‘women only’ hip-hop event. I have however run events that try and address the huge imbalance that I see in our culture, where pretty much all the role models are guys.

We need to support one another and encourage girls to get involved in hip-hop, because we need more strong female role models. Male and female are nothing without the other, and a party’s much more fun when there’s a good mix of boys and girls… particularly if they’re all repping HARD! 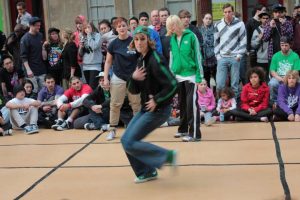