I’m not sure if I’ve lived a sheltered life, or if my head is too full of other things, but I somehow missed the hype around ‘Hamilton’ – a majorly successful piece of Hip Hop Theatre.

Following our installation piece ‘Landmarks’, for Made in Roath Festival, Rufus Mufasa kept drumming into my head ‘you’re a set designer’, ‘you’re a theatre designer’… I just smiled and nodded. But then I had to come with something for her ‘Fur Coats from the Lion’s Den’ album launch. I ‘dressed’ the set with record sleeves, fairy lights, silk scarves and a red carpet, and loved creating an intimate space for the event.

So ‘what is Hip Hop theatre?’. I went to see a piece billed as Hip Hop theatre at Wales Millenium Centre years ago – annoyingly I can’t remember the title of it, but I do remember coming away feeling let down. It wasn’t Hip Hop in any way related to my understanding or experience of Hip Hop, but then nor are many ‘Hip Hop dance’ performances. My experience of Hip Hop is that it is immersive, participatory and circular. What we went to see was simply theatre – I was an audience member, and the people on stage were performers, separate entities.

Collaborating on ‘People-Picture-Power-Perception’ is a totally new experience for me. Training for battles and jams is very different to training for a performance. Creating visual work to be part of a theatre set is totally different to painting on a wall. What is really refreshing though, is the collaboration process – sharing ideas, experience and knowledge to come up with something ambitious, as a group. Working through things together, which may not on the surface relate to an end product, but it all feeds into what we are producing. 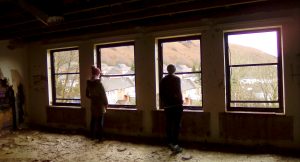 Unity and Boost taking a break from creating new work in an abandoned hospital.

We have put out a questionnaire to gain a wider input on ‘Perceptions’. Many of our discussions have been around gender, barriers and relationships, and this is a theme running through the piece. We wanted to take these discussions further, asking the public to input their ideas, some of which are already being used as inspiration.

We’ve also been researching the roots of Welsh Hip Hop. Talking to our mentors, who were there at the beginning, asking for their input because our culture comes from what they were doing in the eighties. These conversations are shaping ‘People-Picture-Power-Perception’, because how can we not pay tribute to those who came before us. What we are saying with this production is ‘this is where we came from, this is where we’re at, where are we going now?’. People like Lil Miz (aka Pyklops), Skroe and Oner, DAJ and Haylstorm, who hold that knowledge and freely pass on their learning to myself and so many others along the way. 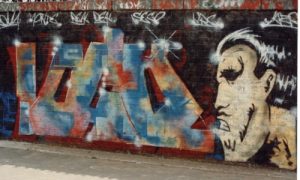 I’m excited to see what Welsh Hip Hop theatre is, and what it could become. I hope that it’s more fulfilling than my first impressions of it, and will be keeping an open mind…

People-Picture-Power-Perception is on at Chapter as part of Cardiff Fringe Theatre Festival, on Thursday 31st May at 7.30pm. Tickets £10/£8: Book early to avoid disappointment.