I was asked to paint a Cuban themed mural including portraits of both Fidel Castro and Che Guevara. I already had some knowledge about Guevara, from reading and watching the film of the Motorcycle diaries, which I loved. The diaries of his travels through South America in 1952 as a 23 year-old medical student captured not only the country, but his shift towards becoming the iconic revolutionary regularly pasted on t-shirts and posters today. 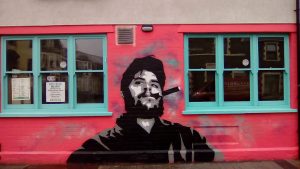 Castro, the Cuban nationalist, paired up with ‘El Che’ when they met in 1955, and the two immediately clicked through a shared optimism. They went on to lead a guerilla army, toppling the Batista dictatorship in the Cuban revolution. 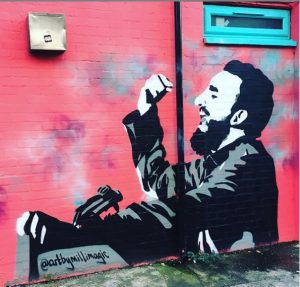 The close friendship between Castro and Guevara took many twists and turns, eventually turning sour. 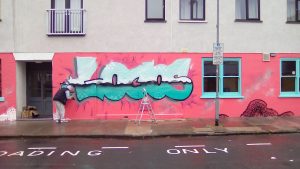 Arnold worked on the mural with me, putting up a Locos piece in the centre of the two men’s portraits.

In researching for the piece I wondered ‘but what about the women?’. Che was married twice, first to Hilda Gadea – Peruvian economist, Communist leader, author and mother of his daughter Hilda Beatriz “Hildita” Guevara Gadea. His second wife and mother of four children was active in the urban underground movement, and first met Che during the revolutionary war in Cuba. Fidel Castro had relationships with a number of women, resulting in at least ten children. Much of his private life was censored by state media. 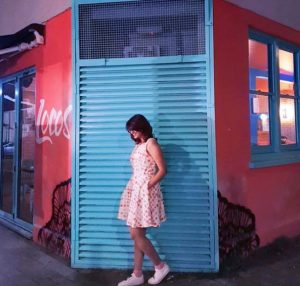 When a girl reaches 15 in Cuba, her ‘quinceanera’ is a sacred rite of passage. An elaborate, expensive affair where the girl dresses up for photoshoots and a party. Outfits often involve lace – trims, gloves, ruffles, fans and resemble wedding dresses or ballgowns. 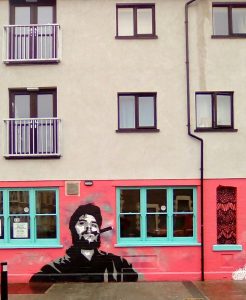 Lace patterns pull the piece together.