This weekend I painted at Leake Street as part of two events in the same place. Communication issues and frustration about Femme Fierce’s organisation and focus meant that a second event was arranged for the same day. This allowed artists to take back some control over their own environment. The mistrust around Femme Fierce is due to the fact that there is money involved with no accountability. On top of this, Ayaan doesn’t paint.

Graffiti, Rap, Djing and Breakin’ aren’t about performing or spectating – we exchange.

Rap began as lyrical cyphers, kids rhyming together for fun. Bboys exchanging ideas through dance cyphers. DJ’s provide the music for people to rap, to dance, to party – Peace, Love, Unity and Having Fun! A good DJ controls the vibe, holds the flow, affects the mood, provides the energy.

A crowd can give energy to an MC or dancer, but it can also suck energy away. If too much is made of the performer/spectator dynamic, it becomes something else – the essence of hiphop is gone. I find it really strange painting in London because of the amount of spectators. We paint together for fun – we vibe off each other, teach each other, provide support for one another. Having ‘street art tours’ coming by and taking photos while we do this can be intrusive.

Femme Fierce 2016 benefitted from taking place alongside an open jam – a day where there was an even mix of men and women. We balance each other. Femme fierce and other all female jams are key in inspiring women to start painting who otherwise wouldn’t. For linking up like-minded people who want to paint together, who haven’t made those links in their own community. If Femme Fierce is to continue though, it needs to be run by artists, for artists.

Don’t be a spectator. 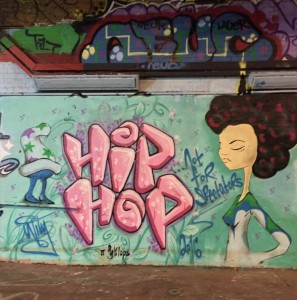