In 2016 I heard that Brecon was holding a women’s festival. Having been involved in a number of events for International Women’s Day I contacted them to see if I could paint for it. I was too late but the organisers kindly included me in the programme for 2017.

I spent a day in Brecon speaking to people about it, trying to find a suitable wall, and permission to paint it. I came away with a couple of options and followed it up with National Parks, whom I didn’t realise have so much control over what the town looks like.

Speaking to business owners, the Town Clerk and members of the Chamber of Trade, it was clear that there is a lot of concern about derelict buildings and empty shops. My final choice was to paint a boarded up building on the High Street. 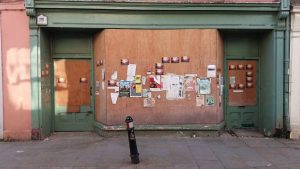 As soon as I started putting on the base coat emulsion people started thanking me for improving the appearance of the shop. PLAN Brecon posted some images of my work in progress on Facebook, sparking a discussion which I followed with fascination. One of the first comments ‘Don’t need this type of art it sends out the wrong signals we not in new York’ initially made me chuckle, but on reflection I think this insight was actually quite astute.

I learned my art-form by painting on legal walls with friends. In Hip-Hop culture, we have an ‘each one teach one’ ethos. Graffiti is a community-led form of alternative education which grew from the political situation in 1960’s New York. Extremely poor areas of the city had been left isolated and deprived, and young people in those areas instigated what has been referred to as one of the most important art movements in recent years. The authorities, rather than addressing the social problems at the time, blamed graffiti – a visible, easily identified target. The media portrayal from this time is what has shaped our understanding of the art-form right up to this day.

When I was growing up, Brecon was a thriving town, and like many it has suffered from online shopping, large retail outlets and chain shops sucking money away from independent ‘High Street’ businesses. I’m pleased to say that my mural has sparked some positive exchanges online, which I hope will lead to real projects and more people working together.

Change must come from grassroots level, and can only happen if people are able to work together, putting aside their differences. Street art is not permanent – that’s the point – it’s part of an evolving landscape. A landscape which now needs to adapt quickly to thrive. The internet has brought shopping into all of our homes, and we may need to re-think what a Town Centre could become, before it becomes isolated and deprived – like parts of 1960’s New York. 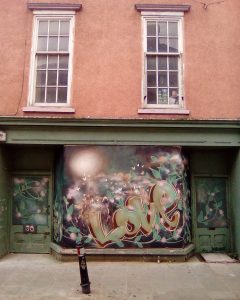 Not an Isolated Incident Knitting and Graffiti… Good for our mental health.
Scroll to top